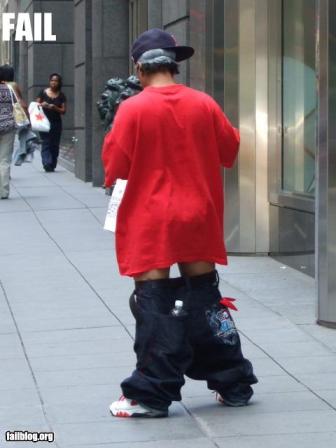 As Joe and I drove to work in Philadelphia the other day, windows down, the 85 degree weather beating down on my head, we noticed a man selling bottles of water by the side of the road.

The frosty looking bottle of water in his left hand was  the first thing my dry mouth noticed, but my eyes soon wandered to the strange space that had been formed between his shirt and his belt, replaced by some wrinkled, plaid-looking material.

Was he trying to get a breeze going back there? It was pretty warm outside. Was he simply showing off his “lady (manly?) lumps”? Eh, I wasn’t impressed. Did he think it would sell him more bottles of water? I didn’t see anyone waving him over with money in their hand.

And so I wonder: what is the deal with men who choose to wear their pants directly below their cheeks? Now I’ve seen men of all colors do this, by the way. I don’t think it is a matter of race, but one of idiotic “style”.

What goes through ones head as he wakes in the morning, lays out his outfit for the day, and proceeds to put his jeans on one leg at a time just like every other (actually, sometimes I like to sit on the edge of the bed and stick both feet in at the same time); how do the jeans only end up making it a little more than halfway to their destination? Did they get caught on something on the way up, and their wearer felt too defeated to carry on?

Then there’s the question of whether or not the jeans are too large. It seems mostly to be tall, thin men who rock this strange trend; never really large men. However, I’ve seen the “emo kid” wear his too-tight jeans below his booty as well, held in place by his shiny, rock star pistol belt buckle, or the Batman one he reserves for special occasions.

Do they buy their jeans three sizes larger on purpose? Or are the jeans a hand-me-down from a full figured relative? (There’s an exception.) And the belt…do you have to buy the belt a few sizes smaller, to hold the jeans in proper place?

And then there’s the task of walking! I imagine they’d have to shuffle around all day, since the legs are partially restricted by the jeans and the belt. How do you sit down and stand back up again? Do you need help? Do you have to grab on to the person next to you? What if no one’s around?

Are the boxers considered in this equation, too? Should they be stylish? Do you check for holes before getting dressed? Is letting your ass hang out in winter acceptable, as well? Do you wear Christmas underwear then? Is there a support group for this?

It’s all too much for me to handle. 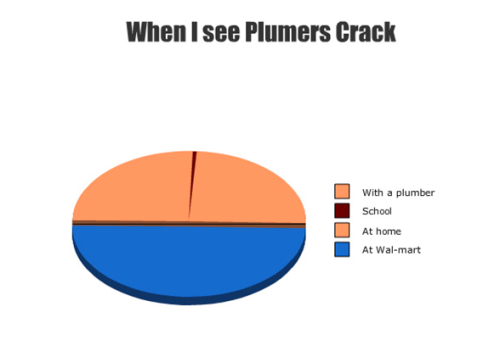 I’ve only just scratched the surface of the butt cleavage phenomenon.

17 responses to “Every Day I’m Shufflin’”