my house is young

the wallpaper is paisley

it warms every room

it’s only an old soul,

there is a snaking scar

of the eggshell ceiling

it looms just over the

there is an aching draft

that invades my house

blankets at the bottom

there is a certain window

where I watch the sun

I dream through the glass

I weave through my house

I hang words and shapes

over the puncture wounds

it’s reliable, after all

The Songs of All We Made

on a tuesday in the evening I

mindless humming of some

going in and out of the

that signaled all around our

turning of the washing

stuck on repeat i am

a pair of your old

with your coffee rings

i fold corners and

the bed is never

i need that sense of

is so close to

with fading back into the

There’s voices in my kitchen. 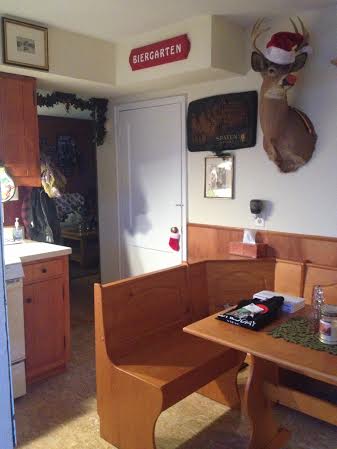 Sometimes, while I’m lying on the living room couch, the dog or the cat will suddenly whip their head up to the same corner of the ceiling, eyes like dinner plates. No amount of arm flailing or name calling breaks either of them from their trance; it’s only when whatever has demanded their attention breaks its grip that one of them looks at me with a “what?”. Creepy, to say the least.

A few months ago I was standing in our kitchen. Joe was either upstairs, or not home at all. I can’t remember. But what I do remember is the deep voice, slightly drunk, calling out a nonchalant “hey” directly behind me. I almost gave myself whiplash, turning to see who the hell had broken into my house and was now trying to make conversation. But when I turned all I saw was the refrigerator, the kitchen table, the basement door. Nothing else. My heart leapt high into my throat with that feeling you get when you almost drop the turkey on Thanksgiving day. I told Joe, I told my best friend, we discussed and let it go.

Today I scrubbed the house from top to bottom, in anticipation of the in-laws arriving tomorrow. As I vacuumed the kitchen rugs the two dogs swarmed me, barking and biting at the vacuum because it’s their sworn enemy. With my back to the table in the photo, vacuum roaring and dogs barking, I suddenly heard another “HEY”, or something like it, boom clearly over every other noise. I had that heart-leaping-out-of-my-throat feeling again, immediately, and when I whirled around I expected to see Joe standing behind me, telling the dogs, like usual, to knock it the hell off. Besides being startled my first thought had been “what is he doing home from work?”; but, like before, there was no one there. I texted him right away.

After Googling a bunch of nonsense I decided to take that photo. I don’t see any strange white orb thingies floating around, or any faces in the shadow on the basement door. All I see is a nice clean kitchen (hey, I’d just spent an hour scrubbing the countertops). I’m not sure what I believe in when it comes to the paranormal, but this experience – and the kooky relationship between the animals and the living room ceiling – has me seriously thinking something is floating around this house. I mean, it is sixty-something years old.

Does anyone else find themselves experiencing strange sounds or feelings in their own home? Maybe it’s all in my head.

And just because I’m feelin’ good….

Enjoy. And now, to bed. Man I hate the morning shift.

Romantic Monday (Part …? What Week Is It?)

My days and weeks are all discombobulated. (Wow, I actually spelled that right on the first try!) I’ve missed far too many Romantic Mondays, so it’s time to rejoin the loop! But in my defense, it’s because I’ve been totally and hopelessly in love with our new home.

But this poem isn’t about our new home.

I fell into you

I’m not sure when

Maybe when you touched my hair

Or maybe it was when you

Pulled the sheets over my shoulder

I never knew how to swim

But I was just fine with learning

When I had to

I was truly amazed by this.

After a week of hold-ups ruined our original settlement date, Joe and I finally signed our lives away for the next 30 years as the proud owners of a beautiful new home! We finalized everything on the eve of Thanksgiving, and spent most of that night and Thanksgiving day moving our crap in. We still have a few odds and ends to collect. We even have a kitty already! Pictures and videos to come. I plan on being a crazy cat lady. (Not really…) But I’ve already taken a disturbing amount of pictures of her lounging.

And so I come to you from the Tree House Coffee Shop, a cute little place close to our home, where they have veggie sausage and put hearts in their lattes. They also have a crappy internet connection (or my Netbook is slowly dying), which proves my love to you since it has taken me half an hour just to get this far in my post. But – they have an internet connection. I’ve been missing only half because I’ve been unpacking and walking around pantless (just because I can); the other half is because no one can get to our house to give us cable and internet until Tuesday! I tried stealing the neighbors’ internet but everyone seems to keep a secured connection around here. Silly neighbors.

I hope everyone had a wonderful Thanksgiving. We still managed to cook a turkey, and ate it surrounded by boxes. I am thankful.

So in the last week I and/or Joe have, in our new home:

I’ll be checking in with everyone as soon as we have our own internet. This turtle-like connection has gotten to me.

Happy Friday, everyone! And happy last day of November!

House hunting is…tiring. First, hours are spent online staring at house after house with ugly wallpaper and ’70s carpeting and maybe a nice yard or some hardwood flooring thrown into the mix. Once you’ve finished with that and put some sort of list together and your eyeballs are dangling from their sockets, then you can do a few drive-by’s (not those kind) and awkwardly crane your neck while still in the vehicle and try not to look too suspicious as the current owner mows the lawn and tries not to notice the bajillionth person to ride slowly by their home.

Isn’t this supposed to be fun?! Well, it did get sorta fun when we finally made an appointment with the Realtor, to see six – six – houses in one evening. ::head explodes::

But really, Joe and I were definitely excited to get the ball rolling. But as first time buyers, we don’t know much. Especially me. “Oh! This is pretty!” Joe told me to keep an eye out for water damage, mold, blah, blah, blah – “I like this bathroom!!! Look at this bathroom!”

Give me a bill and I’ll earn the money to pay it. I’ll also earn money to hang pretty artwork and paint a red accent wall. (I’m really into having an accent wall.) So some of the first five homes we saw on Wednesday definitely had potential; I was even able to look past the wall-to-wall green decor in the living room of the 60 year old one to see how open and spacious it was. And some sent us running for the hills. The basement of the better-in-theory home backing up to a lake had a fermented cat urine stench that bitch slapped us right in the face when we opened the door, and left Joe with a horrid headache for the next few hours. The “fireplace” advertised in the cute little brick home minutes away…consisted of a cracked mantle piece and a set of plastic firewood stacked neatly into an indent in the living room wall.

But then there was number six. Number six with the detached two car garage with a loft above it, all the size of the house itself, all Joe’s music-playing-teaching dream. Number six with the hardwood floors and kitchen with tons of cabinets and counter space. Number six with the big beautiful window in the living room with a ledge big enough to put a cushion on and use as a reading nook. Number six with 1.5 baths, the clean, dry basement, the adorable stone front, the quiet street even as we toured it at rush hour. House hunting is fun!!! (Sometimes.)

We just put in a bid. Fingers crossed, friends!!!

Pick Me Up Poetry